Italy’s deputy prime minister Angelino Alfano called him “one of the most dangerous fugitives”, but to his neighbours he had been an “ordinary”, “caring”, “lovely” neighbour.

A suburban cul-de-sac of semi-detached maisonettes in west London might seem an unlikely place for a Sicilian Mafia boss to be living.

But in August last year the residents of Manor Waye in Uxbridge discovered the man they thought was Marc Skinner was actually Domenico Rancadore.

The Italian police say he headed a family involved in extortion, racketeering and drug trafficking.

Joan Hills who lives next door, said she never suspected the double-life Rancadore was living.

She did say, however, that his strong Italian accent and surname did seem to be at odds with one other.

“We used to say Skinner wasn’t a very Italian-sounding name,” she said. “My husband once joked, ‘I think you must be in the Italian Mafia’.”

From the ‘Heaven Sent’ collection by Frances Wadsworth-Jones

A young artist being showcased at the Museum of London has found inspiration for jewellery in pigeon droppings.

Frances Wadsworth-Jones from Ealing, west London, creates brooches using crushed precious and semi-precious gems which sell for up to £2,500.

She said it “played on the idea” that bird droppings landing on someone was “lucky”.

Filipinos in the UK have spoken of their desperate attempts to contact loved ones back home in the wake of typhoon Haiyan.

They have described the heartache and sleepless nights caused by the “national calamity”.

This weekend the doors of some of London’s most creative, intriguing and historic buildings will open to the public for free for the 21st year.

But in 1992 when Victoria Thornton started Open House London and looked for participants the response was “No, no, no”, she says.

Today the concept has “snowballed” to include 20 cities around the world.

And even that most famous of houses 10 Downing Street opens later.

Evidence from Jack the Ripper’s murders, death masks, the first truncheons and vintage police cars could be brought together for the first time under plans to create a Metropolitan Police exhibition.

With New Scotland Yard being sold and its private collection from crime scenes needing a new home, the Mayor of London is championing the idea of a new Met Police museum.

At the moment, artefacts from the Met’s 184-year history are in a warehouse, and small, scattered pockets across London largely closed to the public or only viewable by appointment.

“Whitehall partially blocked: a man is naked atop the equestrian statue”. It has to be one of the strangest tweets the BBC London 94.9 travel team has ever put out. Last year a Ukrainian man was up there for three hours. Jo McDermott returned with a fully clothed man from English Heritage. 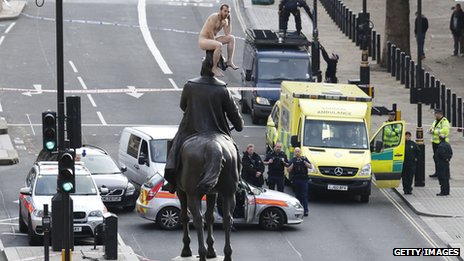 The Duke of Cambridge’s steed stands foundering with a set of wooden planks at its knees.

Prince George should be holding a Field Marshall’s baton but it was snapped off by a naked man last November.

While his sword is bolted back into his left hand he wears the same irrepressible expression he had when Dan Motrescu sat on his head.

Soon repairs will put this chapter of the bronze commander’s 107-year history behind him.

The names of 205,000 people once restricted to overgrown graveyards and dusty archives have been liberated for the world to see. 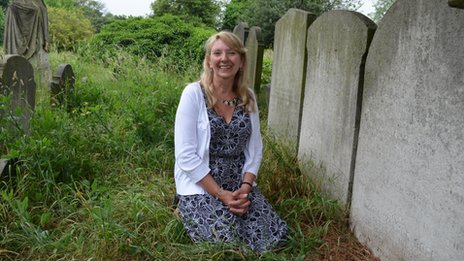 Brompton Cemetery in West Brompton, west London, is the first of the “Magnificent Seven” London cemeteries constructed during the 1830s and 1840s to put all its burial registers online.

It means Janet Ellis has found a family grave she did not know was there.

She also discovered a 13-month-old relative, for whom no records existed.

For the 100th anniversary of Chelsea Flower Show, I wrote about the small show with a big birthday.

I also produced an audio slideshow in which members of a nursery which has shown at every single show recall their memories.

Posters of Margaret Thatcher due to be shown at Westminster Tube station have been banned by advertising bosses.

Six portraits of the former prime minister, including a depiction of her as Queen Victoria, were due to run from this week.

CBS Outdoor, which sells advertising space across the London Underground, said running them would break Transport for London (TfL) guidelines.

Over 1,200 posts later and now working in Britain for the Victoria Derbyshire programme, this is a log of her online, TV and radio work.