He’s from Harlem. She’s from Harlesden. Hip hop star Fatman Scoop and a Tube busker came together in an unexpected way.

Four professional singers interpret their journey on a London bus guerrilla-style to the surprise of passengers.

Filming and reporting by Josephine McDermott.

A gay Muslim man from west London who dresses up and performs as a woman in a nightclub says he faces regular death threats from fundamentalists.

Asif Quraishi from Southall runs an Asian gay night in Ealing, west London, where he performs as Asifa Lahore.

Filming and reporting by Josephine McDermott. 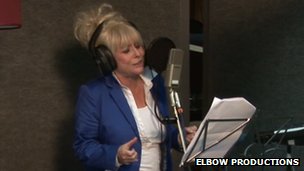 Snapshots taken since 2009 from London buses

A Freedom Pass entitles Londoners to free travel from the age of 62. But few exploit the potential of free travel across the entire capital, from Hillingdon to Havering, Barnet to Bromley, quite like three retired ladies.

They have set themselves the challenge of travelling on every bus route in London from end to end and blogging about it in numerical order.

They started their challenge in March 2009 and aim to complete every journey up to the number 549, plus the 600 routes which are not school buses.

Mrs Hunt, a former History teacher at Watford Girls’ School, said: “It was probably my idea. I’m not a Londoner like the other two and I was completely gobsmacked how far the buses go.”

Several countries have created special Olympic hospitality venues for the Games. The Jamaicans have the 02, the French have Billingsgate Market. Jo McDermott headed to Alexandra Palace to check out one of the most ambitious, with a party reputation from previous Games.

For the first time at an Olympics, Holland House has branched out and taken over a boat to bring the party atmosphere of London to Weymouth where the country’s sailors will be battling for gold medals. Jo McDermott was invited on board.

With Team GB’s incredible success, it’s easy to forget what the pain of losing feels like. Every country handles it differently. BBC London 94.9′s Jo McDermott was at London Bridge at the Swiss party camp for Roger Federer’s final.

Attention is now turning to London’s handover to Rio for the 2016 Games. Jo McDermott headed to Chinatown to find out how the Chinese there think London compared to Beijing.